So finally we've released Opie 1.2.3. It's been a long road, but a lot of people helped out (some of whom are new to Opie) and that made all the difference. It's nice to have something to show that the project is still alive :)

Next on the agenda: 1.2.4, naturally. I hope we can improve synchronisation, and that includes not just working on the OpenSync plugin, but also fixing up PIM bugs on the Opie side and likely fixing problems syncing with Qtopia Desktop as well. In general I'd also like to get a few of the long-standing annoying bugs fixed too. If there's something annoying that prevents you from using Opie on a daily basis, please report it - or even better, try to help us fix it.
Posted by Blue Lightning at 1:07 pm 5 comments:

OK, so thanks to some work by Marek Vašut (Marex), Paul Sokolovsky (pfalcon) & polyonymous in fixing the OBEX regression, we are nearly ready to release Opie 1.2.3 - mid next week is the target. I hope the release will breathe some new life into Opie - certainly there has been quite a bit of activity over the past week or so.

Part of that activity was to do with getting the new version of Konqueror Embedded working (which is not actually part of Opie, although one might say it is the unofficial flagship browser of the platform). Thanks again to Marex it is now almost completely working: 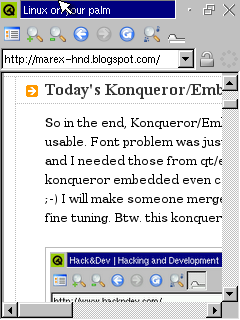 As you can see the window style needs to be fixed and a few other bits might need some work, but otherwise we've now got a working modern browser :) See the Opie wiki page for further details.
Posted by Blue Lightning at 5:31 am No comments:

So, I was setting up a PC for my sister running Kubuntu 7.04 (Feisty Fawn) and she needed wireless to be able to connect to the internet. I had a spare NetGear MA311 PCI card, and I figured it's fairly old, it's been well supported for ages using the hostap driver - so it should just work out of the box, right?

Wrong. I couldn't even see any networks using KNetworkManager. After fiddling around I discovered that not one, not two, but three wireless drivers were dueling to access the card, and the one that won was the old linux-wlan-ng driver which doesn't support any wireless extensions that NetworkManager needs. After searching through the bug reports at launchpad.net and blacklisting the prism2_pci, prism2, hermes, orinoco, and orinoco_pci modules, I eventually got it so that hostap was the only driver in charge of the wireless card. I tested all of this on a spare machine at home and it connected to my wireless just fine.

I drive back over to my sister's place in full anticipation that it will now work with no hassles. Nope - I discover the network at her flat uses WPA, and inexplicably KNetworkManager can see the network but thinks it's only WEP. Unfortunately I had not tested making a WPA connection at home beforehand or I would have discovered this problem immediately. I tried connecting manually with KNetworkManager, I tried running wpa_supplicant directly (again, it could see the network but insisted it was WEP), and I tried putting the connection settings in /etc/network/interfaces; nothing worked.

I knew I could connect to the wireless network at my sister's flat just fine with no configuration from my laptop (running the same version of Kubuntu, but with built-in Intel wireless using the ipw2200 driver), so I knew it could work. So after looking through what was available for purchase here and checking up on Linux support, I bought two more PCI wireless cards - an Edimax EW-7128G and a Netgear WG311T.

At home I tested the Edimax card first. It was detected (using the rt61 driver) and again could see my now WPA-encrypted network, but again it told me that it was encrypted using WEP and not WPA, and would not connect to it. Sigh.

The Netgear card was another story altogether. The test machine I had at home wouldn't even get past the BIOS screen with it plugged in, which was disturbing. However, I tested it in another machine I had using a Kubuntu live CD and to my surprise it connected first time with no configuration. Next weekend I put it into my sister's PC and it connected out of the box. Wireless problems solved!

So, if you're looking for a PCI wireless card that should work out of the box with Ubuntu/Kubuntu Linux, then the Netgear WG311T could be the answer - assuming your PC will boot with it plugged in, that is. I'm sure there are other cards that work well, too, and with the introduction of the new wireless stack in the soon to be released 2.6.22 kernel, things will hopefully get a lot better for wireless under Linux in the next 6 months. Still, right now it can be a little frustrating :(
Posted by Blue Lightning at 4:27 am No comments:

Note: my opinions are my own, I don't speak for my employer.